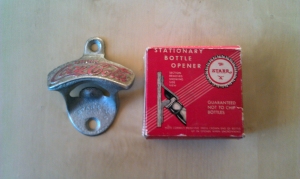 Every year the town of Rutherford, NJ holds the Annual Rutherford Labor Day Street Fair. It is one of the largest antique and craft fair in the tri-state area. In 2010, attendance was identified at nearly 45,000 for this special one day event. Ever since my husband and I moved to the area, we have been going and let me tell you, it does draw many people from around the nation. This year we decide to scout for some Coca-Cola items. Again, we are kinda new at collecting vintage stuff so we were very cautious. There were many tin signs but we didn’t know much about them so we passed. We believed they may have been replicas since those are very common. We tried to get an old Coca-Cola crate but the vendor was actually using the one she had.

Then we came across the bottle opener pictured above. Not knowing a lot about them, I inspected it and thought, “Well, if it comes with a box (and the box does look old), then it may be legit.” I took a risk and bought it. For the moment, I fairly happy with it. I then went home and did some research, Here’s what I found:

So how old is this piece? Well, we can actually tell by looking at the front and the back. The front reads:

The back reads, “Made in the USA.” Now, here are the facts:

Thomas C. Hamilton, a citizen of Boston, Massachusetts, filed for a patent on September 18, 1924 for a Bottle Cap Puller. The patent, 1,534,211, was issued on April 21, 1925. In 1943, certain modifications were made to the patent allowing a new patent for #2,333,088 to be issued to Raymond Brown, the owner of Brown Mfg. Company. Prior to the early 1970’s, all bottle openers were cast in various foundries throughout the USA. Since then and until December 31, 2006, all ‘Drink Coca-Cola’ STARR “X” bottle openers have been cast at the Brown foundry in Germany.

This mean that this particular Coca-Cola bottle opener can be anywhere from 1943 early 1970’s.

Update February 23, 2013 – I’ve received many questions about more information on the bottle openers. Please read the comment section before asking a question as I most likely answered it already. Also, I will write another post soon with additional information so make sure to subscribe to this blog. Thanks!